The program has been taken to promote equitable, inclusive, integrated and sustainable access to safe drinking water, sanitation, and hygiene education for all, particularly the vulnerable people, such as the elderly and physically challenged people, women, men, children and those living in the disadvantaged, arsenic-affected, disaster-hit communities and the hard-to-reach areas. The program involves multi-stakeholder participation in sustainable water resource management through awareness campaign, mobilization and policy advocacy. 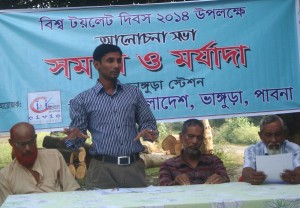 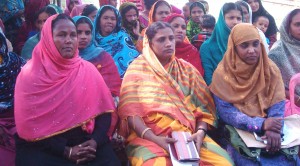 Civic Bangladesh organized a grassroots discussion on “Equality, Dignity and …Toilet” on 19 November at Bhangura upazila in Pabna district on the occasion of the World Toilet Day 2014.  Leaflets, festoons and banner were produced, published and distributed among the group members and the community people to develop their awareness of the importance of the day. The discussion was attended by the members of the grassroots groups organized and supported by Civic Bangladesh as well as the community leaders including the local government representatives, schoolteachers, development workers, religious leaders, famers, etc. The meeting called upon the community people to build open defecation free (ODF) healthy communities and clean environment in the area. They also pledged all-out cooperation to the development initiatives taken by the organization for grassroots awareness and empowerment. 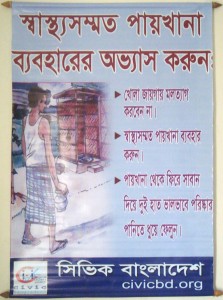